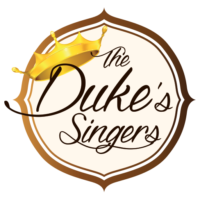 14.11.2021: World premiere of ‘Sisyphus Sohn’ by Pierre Weber & Raoul Biltgen in partnership with radio 100,7 and Kulturkanal. Check it out here.

Since its inception in 2013 the ensemble “The Duke’s Singers” has had a multitude of rehearsals, sung over 20 concerts and generally had a great time together. While the “Duke’s” still had to arrange their first Concert on 5 April 2014 in Feulen to launch the newly founded ensemble themselves, they soon attracted attention and the first concert offers startet to come in. Thus they were invited to perform their Christmas programme as part of the festival “Liichtwochen“ in Wiltz in December 2014. A performance for which they received their first great review: In MyWort, their confident style, seemingly effortless intonation and well conceived programme were praised and their youthfulness and playful lightness was noted as their distinguishing feature in Luxemburg’s choral scene.
(https://www.wort.lu/de/mywort/wiltz/news/the-duke-s-singers-in-perfektion-58fe1d3fa5e74263e13b1b2b)

This high praise was followed by the most hectic yet also the most productive year for The Duke’s Singers thus far. It started out with two concerts in March 2015 in Weiler-la-Tour and in Echternach’s Trifolion after which the Duke’s started to prepare for the biggest highlight of their young career: A masterclass organized by the Il Suono in Movimento a.s.b.l. in Sulmona, Italy! The Duke’s seized this opportunity to present themselves in a different light and performed two concerts with an all-pop programme accompanied by a Combo. However, since they have always been versatile and able to multitask, the Duke’s simultaneously worked on the Gloria and Magnificat by Vivaldi which they performed in situ accompanied by an orchestra. They had barely returned from Italy when their next concert in Luxemburg, at the festival “Musique dans la vallée“ in Redange sur Attert, beckoned. In the autumn of 2015 The Duke’s Singers dedicated themselves to a whole new challenge – a project entitled „ The Gulf (between you and me)“ at the Théâtre National du Luxembourg. For this gig they performed the musical settings by Gabriel Jackson and Chris Jonas of texts written by the poet Pierre Joris about the explosion of the oil rig Deepwater Horizon (2010). Even though the Duke’s ventured into unknown territory with these modern and atonal pieces, they rose to the challenge and acquitted themselves remarkably well.

In the Winter 2015, after a concert for the Croix Rouge in Mamer, The Duke’s Singers started to concentrate primarily on collaborations. In December they thus presented the Christmas programme „In the crystal starlight“ alongside the Ensemble Vocal du Conservatoire du Nord  under the musical direction of Martin Folz. Only a week later they were in Foulscht in order to perform a Christmas concert in collaboration with the Foulschter Gesank. In May 2016 they were invited by the Plan Aktionsgruppe Trier to perform a charity concert in the Frankenturm in Trier. At the end of November the Duke’s were part of the programme „Musikbühne Saar“, produced and broadcasted live by the radio stations 100,7 and SR3. The Duke’s Singers concluded the year 2016 with a concert entitled „Noël Français“ with a programme consisting of music by Marc-Antoine Charpentier in collaboration with the baroque ensemble Ad libitum.

After an extensive creative break and several changes in their line-up between 2017 and 19, the Duke’s are now back in full force and have plunged themselves into their new projects with great enthusiasm!